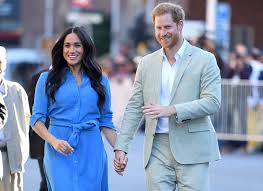 Meghan Markle and Prince Harry just sat down for a two-hour tell-all interview with Oprah where literally no topic was off-limits. And wow, a lot of information was shared. The Sussexes opened up about everything—from their decision to step away from the royal family to Harry’s relationship with Prince William to Meghan’s drama with Kate Middleton, to their new life in California (and their growing family!).

So so so so so cute. Meghan also confirmed she is due this coming summer. Mark your calendars!

“When we were in Canada I had three conversations with my grandmother and two conversations with my father before he stopped taking my calls,” Harry said. He also explained, “I was desperate…I went to all the places which I thought I should go to to ask for help. We both did. Separately and together.”

Meghan revealed that there was racist “concern” from some members of the royal family.

About her pregnancy and “how dark [Archie’s] skin might be when he’s born. In those months, when I was pregnant, all around this same time, we had in tandem the conversation of he won’t be given security, he won’t be given a title…and also concerns and conversations about how dark his skin will be when he’s born,” said Meghan. “That was relayed to me from Harry, that was from conversations that family had with him. It was really hard to see those as compartmentalized conversations. Oprah actually asked Meghan if she’d reveal who said this to Harry and she responded, “I think that would be very damaging to them.”Meghan told Oprah that she and Harry were actually married by the Archbishop of Canterbury Justin Welby three days before the Windsor Castle ceremony. She and Harry tied the knot in their secret wedding in their backyard.

The duchess said in the midst of intense scrutiny, she began to have “real and frightening” thoughts and asked if she could go somewhere to get mental health help but was told she couldn’t. “I went to one of the most senior people to get help. And I share this because, there are so many people who are afraid to voice that they need help, and I know how hard it is to not just voice it but to be told no,” Meghan said. Meghan also said she went to the palace’s human resources and told them directly “I need help.”

“[Going to a hospital] is what I was asking to do,” she said. “You can’t just do that, I couldn’t call an Uber to the palace, you couldn’t just go. You have to understand…that was the last time I saw my passport, my drivers license, my keys. All that gets turned over.”Meghan said she learned how to curtsy right before meeting the Queen, saying “I learned it very quickly right in front of the house,” and Harry and Princess Eugenie taught her. “We went in and I met her, and apparently I did a very deep curtsy,” she said. “I don’t remember it….And then we sat there and we chatted and it was lovely and easy.”

Meghan said this took place the week of her wedding to Prince Harry, and it was about flower girl dresses for Princess Charlotte. “I don’t say that to be disparaging to anyone, because it was a really hard week of the wedding, and she was upset about something.”

“A few days before the wedding, she was upset about something—yes, the issue was correct, about the flower girl dresses—and it made me cry and it really hurt my feelings, and I thought in the context of everything else that was going on in those days leading to the wedding, it didn’t make sense to not be just doing whatever everyone else is doing, which was trying to be supportive knowing what was going on with my dad and whatnot.”