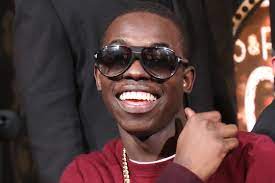 Bobby Shmurda is giving back to his community in a big way. On Sunday (June 20), the generous rapper held the “Father’s Day Give Back Brunch” in Brooklyn, an event for 200 underprivileged families to receive free meals and haircuts.

Although it was primarily set up for fathers and their children, Bobby Shmurda and his team treated anyone at The Win Shelter with a Caribbean brunch boasting jerk salmon, curried chickpeas, stewed chicken, mac and cheese, and more.

According to the press release, three barbers were on deck to provide free haircuts to all dads and kids in attendance in an effort to make them “feel their best” for the holiday.

Shmurda also handed out gaming consoles, board games, action figures, footballs, jump ropes, costumes, and more to the kids. For the dads, they were provided with some new clothing and books. Leftovers were then donated to CAMBA Men’s Shelter in Brooklyn, so nothing went to waste.

Bobby Shmurda was released after serving roughly six years but will remain on parole until 2026.

The 26-year-old was arrested in 2014 but copped a plea deal in September 2016 after pleading guilty to conspiracy to possess weapons and possession of a weapon for his involvement in the GS9 gang. He was initially sentenced to seven years but was granted two years credit before the sentence was handed down.

Shmurda racked up 11 violations while behind bars, including possession of a prison shiv, drug possession, and fighting. In January, Shmurda was finally eligible for conditional release despite being denied parole in September after authorities saw a vast improvement in his behavior.

The concert is being put together by Minerco, Inc., also known as The Magic Mushroom Company, as part of a docudrama that will be available soon on streaming services. Fans who want to attend the show can purchase tickets using Minerco’s crypto-based payment system.

Julius Jenge, Chief Executive Officer of Minerco Inc., called the GS9 rappers “some of the most important artists in the world” in a press release.